Why sailing is outstanding at building effective teams

It's a powerful way for building effective teams. With your team focused on having fun and learning a new skill they will be actively enhancing their team working skills. Sailing is a unique activity with many dimensions to it. As they get to grips with sailing the yacht, your team will:

* gain trust in each other

And they may well face some personal fears or weaknesses and uncover how to overcome them in a fun, safe environment.

Why use yacht sailing for team building?

At first glance, a typical image of yacht racing often shows the crews apparently 'just sitting' over the side of the boat. However, on the most successful race teams there’s a lot more happening than meets the eye.

Running a business and racing a yacht have many parallels. Yacht racing is like a large physical and mental game of chess, but without a clearly defined board to play on. Your team will have no pre-set track or route to follow on the water:

To win the race also requires them to make their best strategic decisions. And they will be up against competitors making similar decisions and choices. Such as choosing the right sails to fly, when to change them and steering most effective course to be the fastest boat home.

Winning teams will often adjust the sails regularly to keep their boat running at top speed. To do this they will be communicating clearly, staying flexible and committed to the goal - trying to win the race! And they will apply their mental skills on navigation and tactics to outwit the opposition and react to their moves.

With good preparation, briefing and orientation, racing a sailing yacht becomes a masterclass in team working, collaboration and coherent communications. All of which contributes to building effective teams. 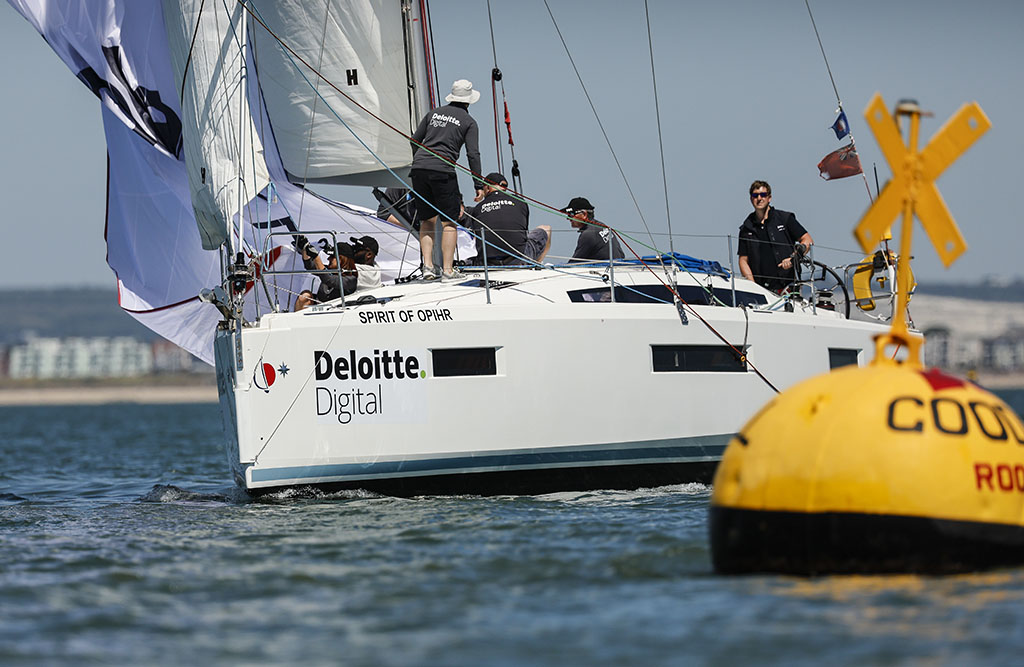 The sails are the key driving force for a sailing yacht. Your crew will learn to work together so the sails can be hoisted and lowered efficiently for different legs of the course. They will be directly involved with trimming the sails.

As sails work rather like a giant bird’s wing they require regular adjustments to get the best sail shape for the direction of travel. Sometimes the crew will need to react quickly to changes in waves or wind strength too. The better the quality of communication between the team members working the sails and the helmsman will usually mean an overall better performance in the race.

In addition, the crew sitting on deck will get actively involved too. By giving feedback on what they can see, such as when the other competitors change their direction, which helps drive the tactical decisions on board.

It's the teams attention to detail and pro-actively working together as a crew that helps the yacht win. And if they drop their concentration or get distracted by unimportant things, it can allow the competitors to get a few vital metres ahead. That's the difference between winning and losing a place in the rankings. Just the same as in business!

The skipper and navigator will brief the crew about the outline race plan, weather forecast, tides and expectations before the race. Crew members may be given some specific roles to take on during the race and may often have to swap roles to give someone a break.

During a yacht race the team will actively be involved in helping the boat change direction and get hands-on with hoisting and dropping the different sails.

The most effective yacht race teams will discuss and share the next changes of course with the crew sitting on the side deck, well ahead of time. It minimises taking anyone by surprise when there is a quick change of direction. The crew responsible for the sails will have more time to prepare, so they can be hoisted or adjusted quickly, keeping boat sailing along at the maximum speed! 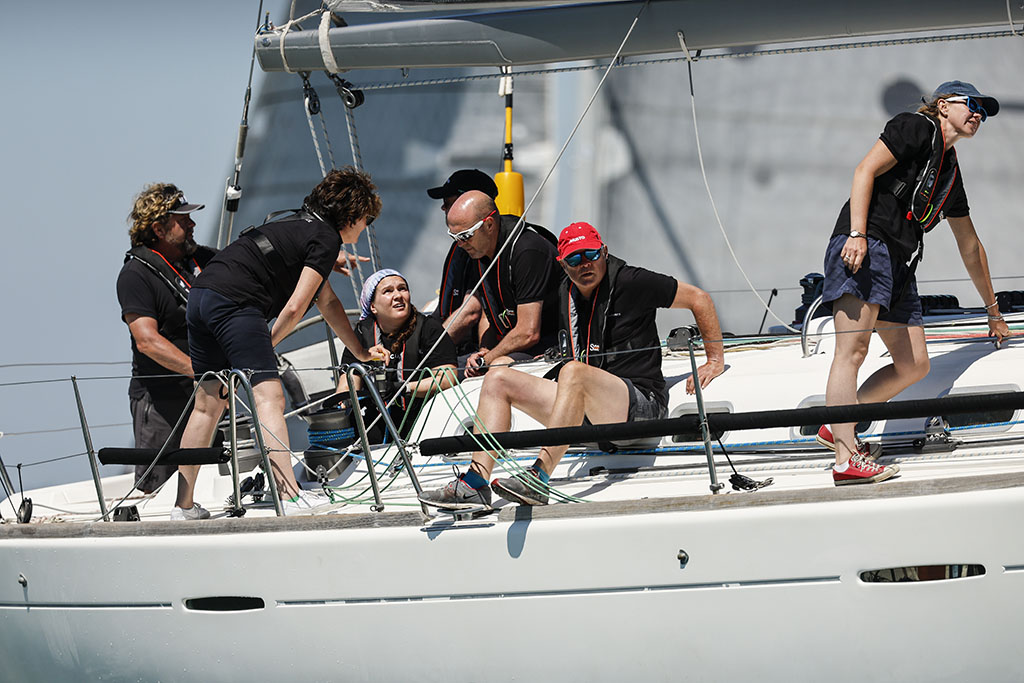 Gathering good background information is the key to an effective sailing race strategy. The navigator will research the latest weather and tide data and check the geography of the sailing area on the chart or GPS. Although it's often best to avoid sailing into rougher waters, sometimes it's a necessity to win the race.

The navigator, skipper and crew will share information and questions at the race briefing and during the race. Your team will get involved in interpreting the onboard data as well. Similar to an internal management information system, on a race yacht modern navigation software gives real time data on:

* boat speed, compass bearing and track (actual direction of travel) to the next race mark

Knowing whether you are ‘on course’ for your next mark rounding, or not, can be crucial to decision making. Although the machines won’t win the race. For your crew, the skill is feeding the information into the tactical thought processes of the entire team.

Responding appropriately to tricky situations is a great skill to acquire when building effective teams. Inevitably, in a yacht race things don’t always go your way. Competitors will get in the way, some vital equipment may get snagged or another boat may infringe a rule.

It can be stressful, noisy and feel well out of your comfort zone. Your crew may need to make last minute, rapid changes of direction or quickly adopt different tactics due to a new situation arising.

Good teamwork on the yacht comes to fore at these moments. It will be your team's process of working together as a crew together that will help bring their boat back on track and deal with the problem. Essentially, it's all about:

* each team member playing their role and helping each other

Yacht racing will certainly take your team outside of their ‘normal’ work situation and create a unique situation. They will learn new skills and share memorable experiences with their teammates.

Sharing a sense of purpose, building self belief, trust and confidence in others and overcoming challenges on the water is immensely rewarding. They will have time to enjoy exhilarating moments and reflect back when relaxing ashore afterwards. These skills are all fundamental to building effective teams. 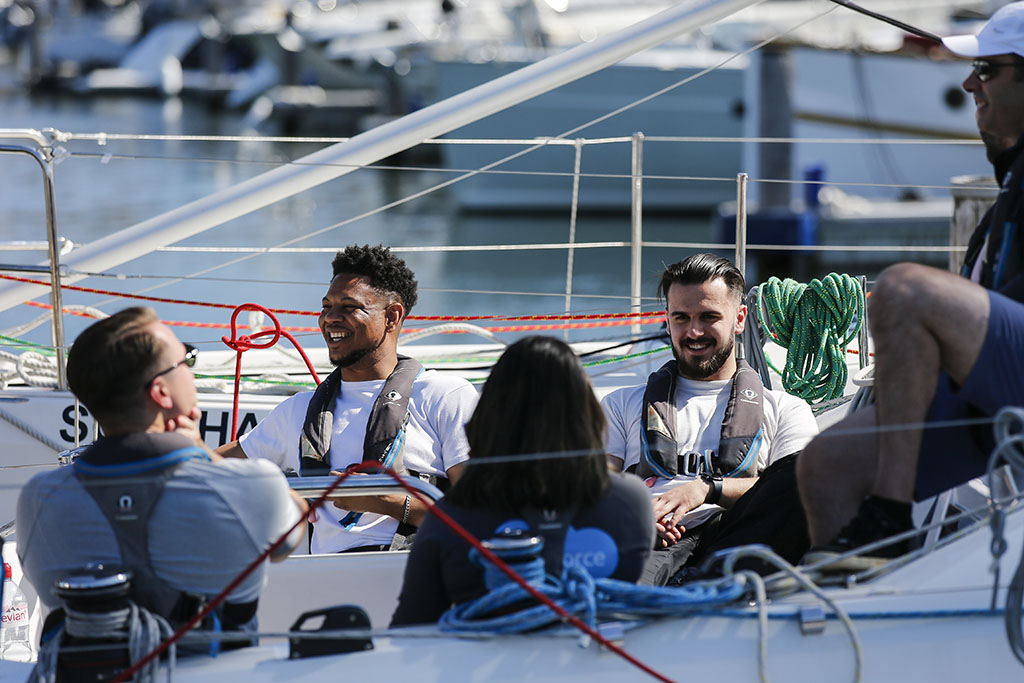 Want to know more - simply get in touch to talk with our experienced team about your team building projects.